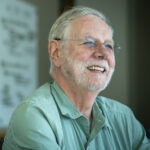 Throughout his career, Dr. Davis has conducted cutting edge, innovative, interdisciplinary research and technology development on cancer, immunology, genetics, infectious disease, novel drug development, and nanofabrication of diagnostic instruments. His emphasis has always been to increase accuracy and decrease cost. He has made significant contributions to research on numerous organisms, including bacteria, yeast, plants and humans.

Dr. Davis was the first to physically map the genome of any organism (1968).

Dr. Davis discovered a simple way to join together DNA from two organisms (“sticky ends”), and was the first to generate a hybrid DNA molecule that could replicate inside of cells (DNA cloning).

He was the first to propose and he participated in the construction of the first high resolution genetic map of the human genome. These genetic markers have led to the current identification of myriads of disease-associated genes, as well as DNA fingerprinting methods used in criminal investigations and global human identification efforts. (Francis Collins, Director of the NIH, was one of the first to use these methods to isolate the Cystic Fibrosis gene.)

This genetic map led to the Human Genome Project, in which Dr. Davis played a major role, developing many of the transformative technologies that enabled the project to finish ahead of schedule and under budget. Collectively, these efforts led to a cost reduction of human sequencing by a hundred-million-fold. It took more than a decade to sequence the first genome (at an initial cost of $20 per base); today this can be done in a few days (at a cost of $0.0000002 per base).  As part of the Human Genome Project, Dr. Davis’s team sequenced or participated in the sequencing of the genomes of many organisms, including Chlamydia, yeast (Saccharomyces), Candida, Plasmodium (malaria), Arabidopsis (plant), and Human. Dr. Davis’s team was the first to release all of their data within 24 hours of its collection. At first NIH strongly objected to this practice, but soon made this a requirement for all sequencing projects. This greatly accelerated research on all the organisms because everyone had access to the sequence, which informed them what genes were present in the organism.

Dr. Davis’s team was the first to develop the technology of Whole Genome Gene Expression, which measures the amount of RNA produced from each gene, allowing one to determine which genes are active (“off” or “on”) within any cell.

With Dr. Ron Tompkins, Dr. Davis conducted one of the first Big Data studies in Human, which overturned existing models and practices regarding the effects and treatment of severe trauma (burns and blunt force trauma, e.g., auto accidents). By the end of the grant, they had demonstrated a 30% reduction in the mortality rate of the physical trauma victims.

At that point, Dr. Davis’s son became ill with a mysterious disease that took years to diagnose. Since then, he has transformed his lab and is spending all his efforts on ending ME/CFS, the horrendous disease affecting and disabling so many Americans and people around the world. Dr. Davis’s knowledge, experience and expertise make him uniquely qualified to take on the complex problem of ME/CFS, so that his son and millions of other sufferers can get their lives back