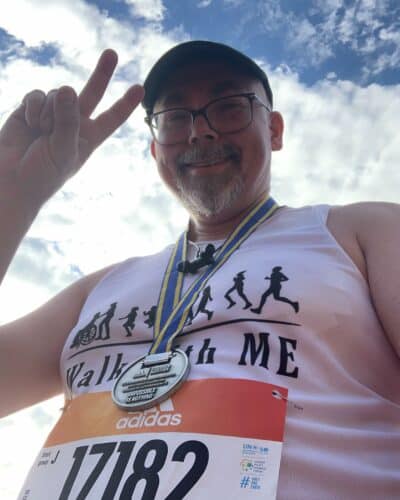 Magnus Svensson is racing against the clock. On the surface, he is competing in the 2022 Stockholm Marathon, one of the largest running events in Northern Europe. But there’s so much more behind the reason for his run. Magnus is running to raise awareness of Myalgic Encephalomyelitis / Chronic Fatigue Syndrome (ME/CFS) – the disease which has severely affected his wife for over five years.

“Living with ME/CFS is tough not only for the person who is ill, but the whole family,” explains Magnus. “The disease is erratic and limiting. It is difficult to plan activities together because too much activity can impair the patient over a long period of time.”

The first time Magnus embarked on a race to raise ME/CFS awareness was 2019. A couple of times, he has also taken the initiative to create and organize his own races to raise awareness and fundraise for OMF.

Since 2019, Magnus and a group of his friends nicknamed “Team Walk with ME” have raised $10,000 USD. Now, the Stockholm Marathon is only the beginning for 2022. Magnus plans to use this marathon as a starting point, leading up to “Fotrally (Ultramaraton-marsch)” on July 1, 2022. Fortrally is a competition taking place in Sweden inspired by Stephen King’s novel “The Long Walk.” There, Magnus will join a team of five Swedish ultrarunners, who will walk, compete and raise funds and awareness for ME/CFS and OMF.

“I want everyone to know that there is no cure for ME/CFS at the moment and that funds for research are much needed,” shares Magnus. “The running community here is very inclusive and friendly, so when I enter the races, I get a unique opportunity to make new friends and spread awareness about ME/CFS.”

Be sure to join Magnus and Team Walk with ME on their journey by following on Facebook, and Instagram. Click here to support Team Walk With ME’s OMF fundraiser!