Ron Davis spent the last week on the East Coast giving talks and talking individually to scientists and doctors about Myalgic Encephalomyelitis / Chronic Fatigue Syndrome (ME / CFS). First, he spent two days at Princeton University. He talked to individuals, groups of graduate students, and groups at lunches and dinners. He gave a talk in the huge Molecular Biology Department (includes immunology, microbiology, genetics, biochemistry, et al) in a big lecture hall with about 300 scientists. He sensed that they were surprised and shocked by how many people are affected and how severe the disease is. They were impressed by the progress Dr. Davis has made with such minimal NIH funding and relying on donations from patients. 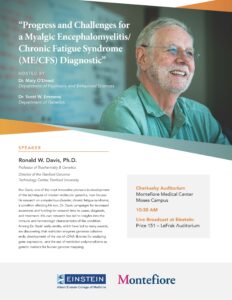 Then Dr. Davis went to the Einstein Medical Center at Columbia University and gave a similar talk to 100 doctors and scientists in person and 184 more who logged in online. Again, they were surprised and shocked by the information he presented. He knew it was being Livestreamed so he didn’t take questions, but talked for 1 1/2 hours and incorporated questions that he is commonly asked. Nobody left. Ron really emphasizes the prevalence and severity of ME / CFS, the need for medical care, the urgent need for research, the growing group of great scientists that are working on it and the fact that none of them have enough funding from NIH.

The week before this, Dr. Davis gave the keynote address at Synchrony 2019, a large Autism conference in Pleasanton, California. Again, he had a large audience of researchers, doctors, and caregivers. They were really impressed by his research and were struck by some of the similarities between Autism and Myalgic Encephalomyelitis / Chronic Fatigue Syndrome (ME / CFS).  OMF Scientific Advisory Board Member Robert Naviaux, MD, talked just before Ron. They are going to collaborate with Ron, sending some patients to his lab so they can investigate similarities and differences. The Autism group will be funded by one of the Autism Foundations since Ron only uses Open Medicine Foundation Canada funds on ME / CFS.